Provide customers with digital items to enhance their virtual life

Every other Wednesday, h/commerce provides in-depth analysis of the most impactful trends reshaping retail.

Today clothing plays a key role in digital experiences. A report about digital fashion has just been released by Lyst. It analyzes how digital platforms are affecting clothing industry and consumers’ behaviors. Apparently, and mainly due to the current climate, virtual fashion experiences are rapidly evolving, and it makes no doubt that the pandemic is accelerating fashion’s digital transformation. Since last year, consumers have been left multiple times without the possibility to go shopping. So, as we all had to maintain social bound through digital platforms and not in city centers, fashion retailers had to be quite creative to continue reaching their customers.

Digital fashion is now emerging in various kinds of digital fields like gaming but also most recently, crypto art.

Big fashion retailers took advantage of gaming during the pandemic

Before the pandemic broke out, some fashion brands had already seen a strong potential in gaming. Indeed, in 2019 Louis Vuitton unveiled a digital collection for the League of Legends World Championship. Then the brand released the collection in real life.

Most recently, the sanitary crisis acted as a real catalyst for virtual clothing and more and more fashion events or even items emerged in video games. All along the pandemic, a lot of famous fashion brands appeared in games mainly as a way to promote their new collections.

Burberry, already familiar with to retailtainment, launched a game called Surf B in July 2020. It allows users to unlock virtual items at different stage of the game. It was also a way to engage the community around giveaways.

Balenciaga, for its part, displayed its fall/winter 2021 collection on Afterworld: The Age of Tomorrow. Users were able to choose an avatar and even to browse into a showroom. 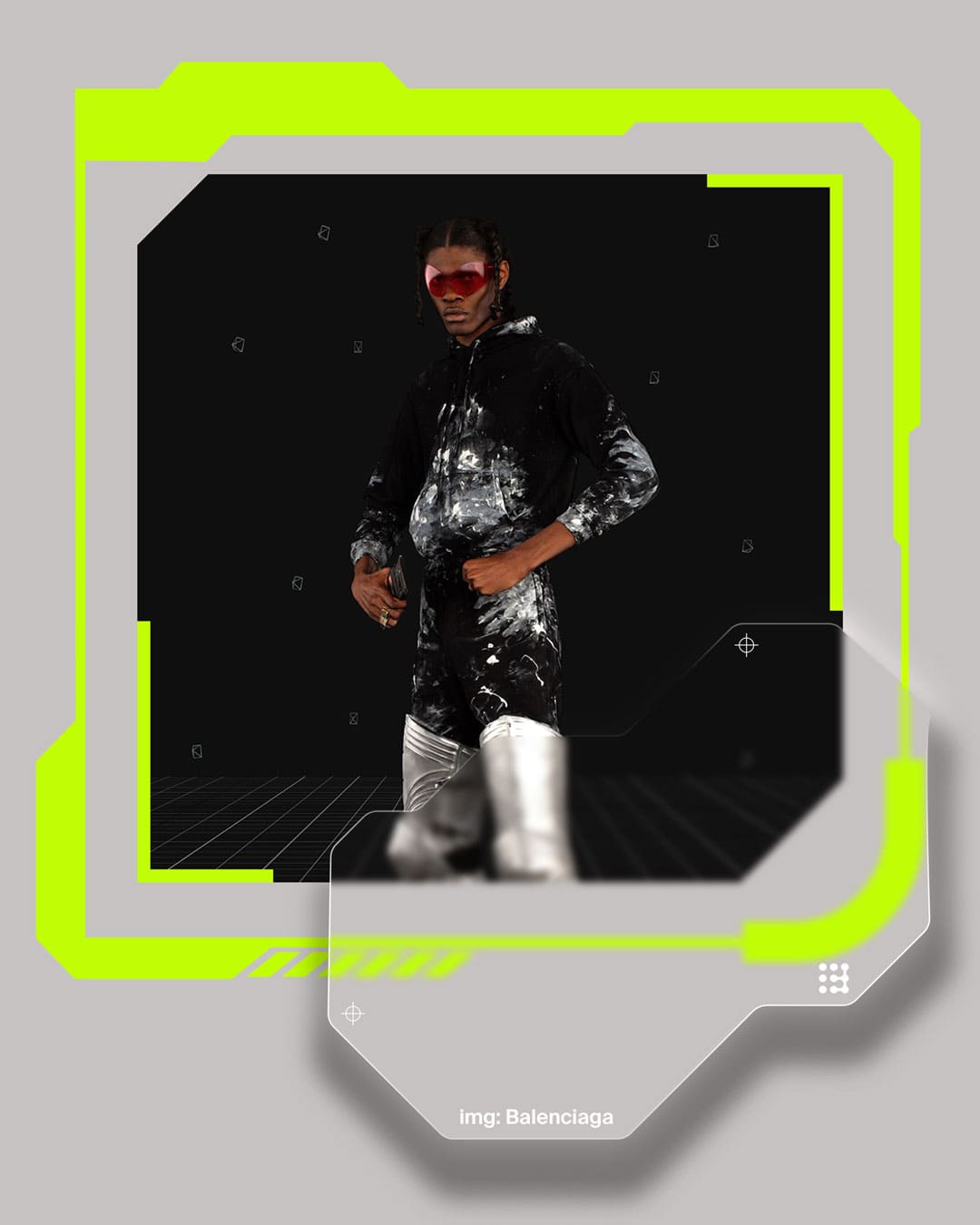 Some games, like The Sims 4 and Animal Crossing, became actual playgrounds for fashion brands.

For instance, in October 2020 Gucci unveiled its new collection called ‘Off The Grid’ in the Sims 4 game.

Different brands like Marc Jacobs and the French retailer Gemo had also been seen into Animal Crossing: New Horizons.

In 2021 now, the polish label MISBHV even came out into Grand Theft Auto. It is the first fashion brand ever to appear in this successful game. 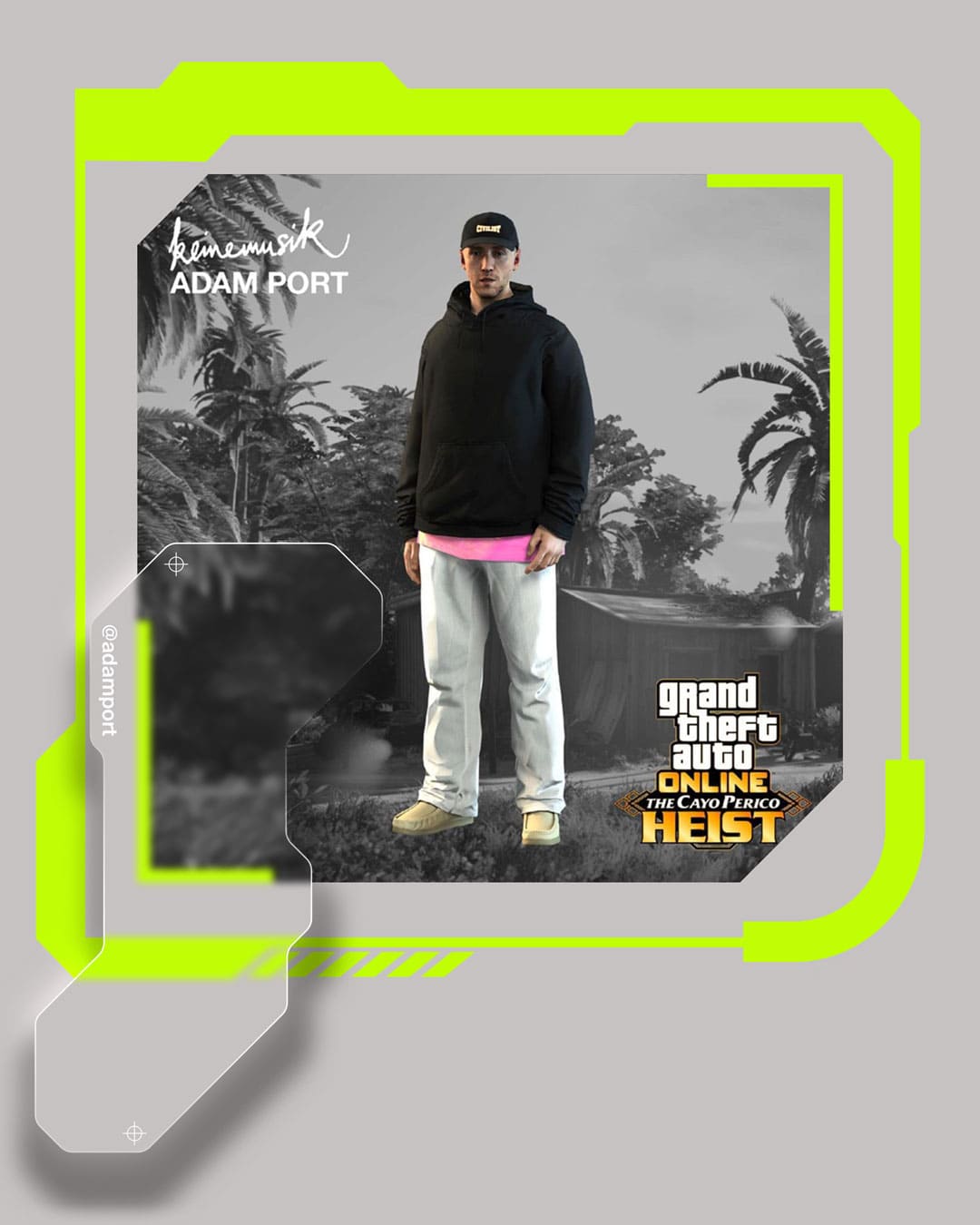 What this strategy usually brings to brands, is a phenomenal increase in searches. As gamers identify with their avatars wearing clothes from famous fashion retailers, they also want to wear these items in real life.

Digital fashion seems to have a bright future ahead, and some brands have already seized the opportunity and moved up a gear.

NFT: From a physical to a digital closet?

As mentioned above, until now virtual clothing was mainly something experienced in video games, through avatar wearing items from retailers, but not in the real world.

One of the first company who made the experience of virtual clothing in ‘real life’ was Carlings. In 2018, the Swedish brand launched its first digital collection. For around 10 euros the items were directly adjusted to Instagram photos with no material version available. All the profits went to the WaterAid charity. This idea came from two important matters for the brand: slowdown excessive consumption and answer to social media development. On its e-shop, we could read: “Be creative without leaving a negative footprint on the world”. As fashion companies are frequently resorting to influencers wearing a fashion item only once to promote their brands, it is also a way to raise awareness among the fashion industry.

However, a new crave made virtual clothing a real thing in 2020: NFT also called Non-Fungible Tokens. This concept has been created by Dieter Shirley in 2017. The Wall Street Journal is defining NFT in the following words: ‘digital art or collectibles that are authenticated or “minted” using blockchain technology and then purchased using cryptocurrencies such as Ethereum. The digital ledger, which anyone can access, tracks who owns a given NFT, and ensures that the NFT can’t be duplicated or tampered with.’

Recently, the birth of crypto art brought NFT to the world’s attention and especially to the luxury industry. As there is a strong speculation around the token’s scarcity, NFT is seen as a great opportunity for fashion brands to target new consumers.

Using this new technology, Gucci just launched a virtual pair of sneakers called ‘Gucci Virtual 25’ in partnership with Wanna, a Belarusian company specialized in AR and clothing. Once the purchase has been made, the user is able to try the sneakers on but not in real life. In fact, the owner will be able to wear them through applications as VR Chat, Roblox…

Each pair of sneakers is unique but sold at a fair price, around 10 euros. The aim of Gucci was to reach the Gen Z, who is keen of luxury and technology but cannot always afford luxury items in real life. NFT are usually reaching outrageous prices but this Gucci’s item will remain affordable and unlimited to reach a wider public. 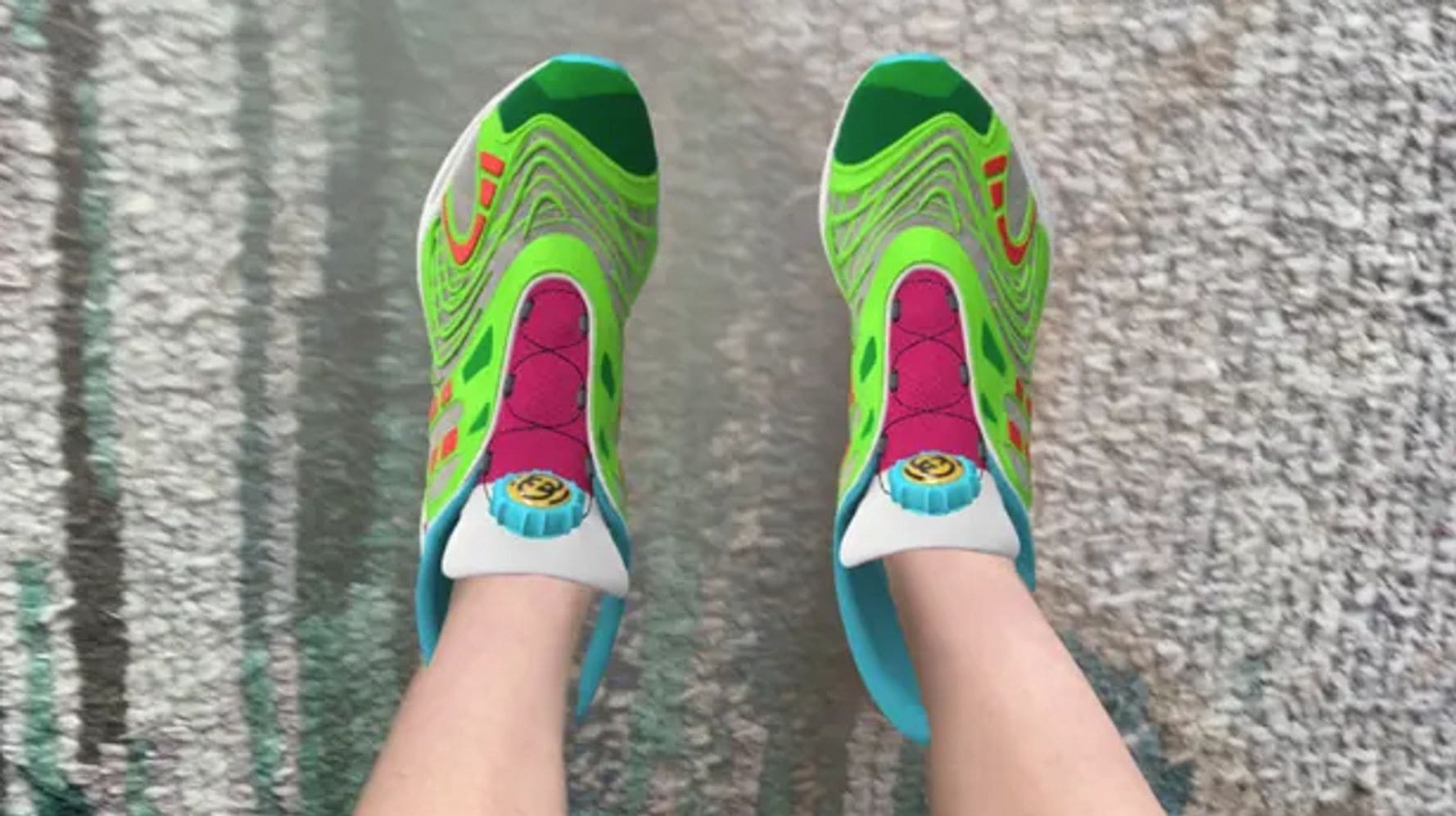 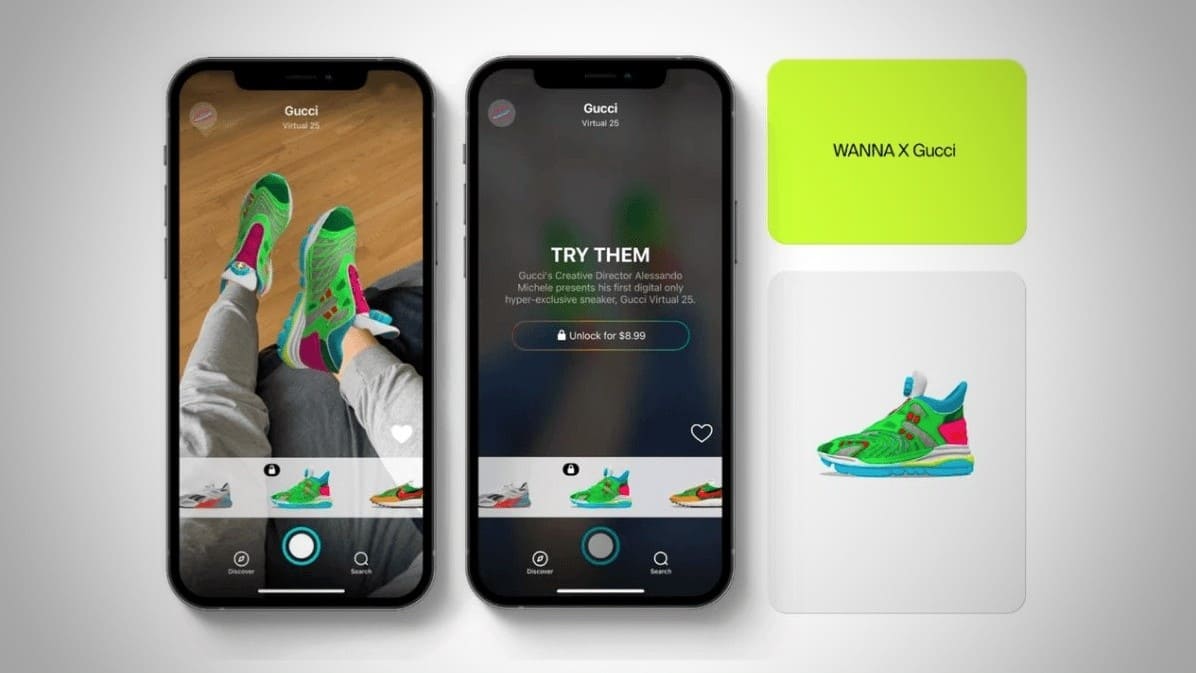 It is not the first time that the brand is launching such an innovation. Earlier this year Gucci introduced its North Face collaboration inside the “Pokémon Go” game. Some avatars from Pokémon Go were seen with items from the partnership next to the Gucci’s stores.

Other fashion brands gave NFT a try. Last February a trio of sneakers was born from a collaboration between design studio Rtfkt and Fewocious.

The sneakers respectively reached the prices of $3,000, $5,000 and $10,000. In just seven minutes, 621 pairs were purchased. In fact, these sneakers had also been digitally released as NFT so they couldn’t be worn or even touched.

However, the strategy is different from the Gucci’s one. Here partnering brands chose to release a very limited edition of sneakers at quite exorbitant prices by exploiting the scarcity phenomenon. This use is more connected to NFT’s primary purpose. 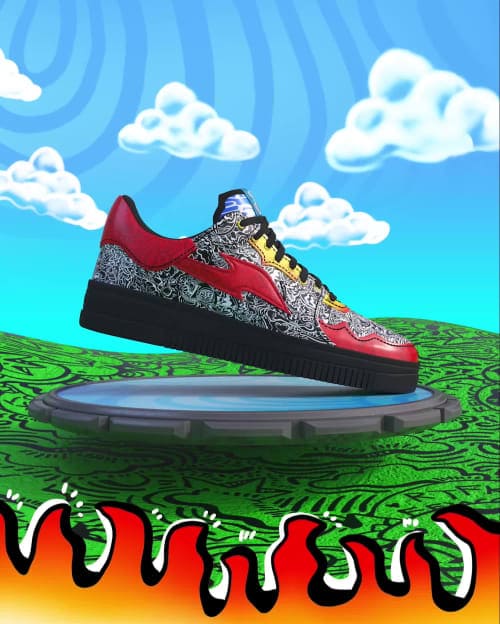 Why is it interesting?

In today’s world, the boundary between real and virtual lives is blurry. Digital platforms have been a powerful way to maintain social bound during the pandemic.

Nowadays, new generations are looking for items, and especially fashion items, to express themselves in real life but also in their virtual life. As brands are relying on AR technology, these virtual items have also ecological and inclusive virtues. Reducing drastically waste and allowing every one of us to enhance our digital lives, these new virtual offers are clearly targeting early adopters.

As virtual life will remain strong, we can expect from other retailers, like home furniture stores or even grocers, a development of these virtual items in the coming months.

Subscribe to our monthly newsletter covering the hottest retail topics. Each newsletter is part of a collection of thematic reports that aims at providing keys to understand new trends and retailers’ strategies.